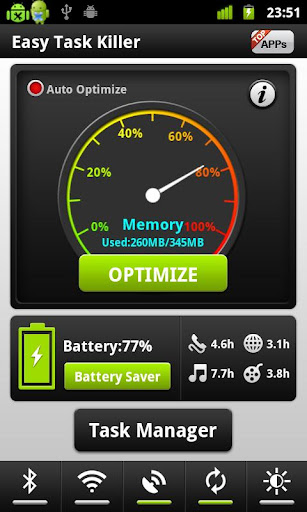 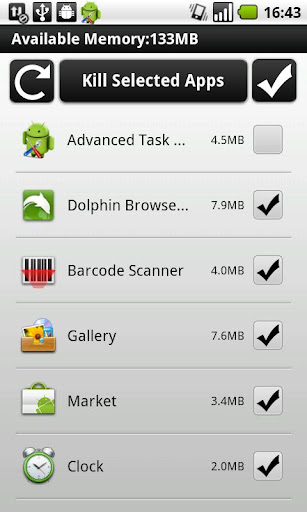 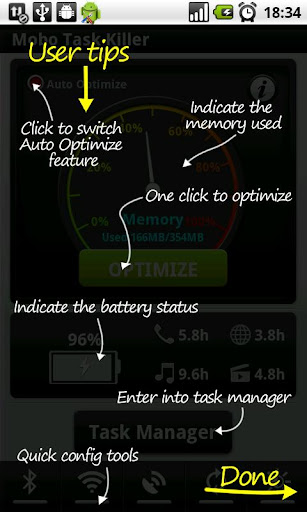 Mobo Task Killer, your intelligent android assistant
Easy Task Killer, Your intelligent Android assistant.
Does your phone always need charging, even once a day?
Does your phone always run slowly by a lot of background apps?
Do you want to find the most memory consuming apps?
Want to find a perfect solution?
Now is your answer!
Easy Task Killer is known as a task killer, task killer manager, app killer or service killer etc. It helps manage your phone system’s running apps and services. If your phone often runs slowly or battery is exhausted so soon, our task killer will be an ultimate choice app to kill tasks, free memory, and speed up your phone as well as save battery.
Optimize your phone easily by widget and shake your phone to get rid of annoying apps.
Features:
* Battery Saver, a plugin to save battery.
* Shake Optimize, A newly-added function! Just shake your phone to kill apps and release memory.
* Auto Optimize, Optimize your phone memory intelligently and automatically.
* Memory Meter, Indicate the amount of memory that has been used.
* One Click Optimization, Free your phone memory by clicking “OPTIMIZE” button.
* Task Widget, Optimize phone memory easily just by a widget
* Task Manager. Kill selected apps or services for memory optimization.
* Ignore List. Put apps that you do not want to kill in it which can protect them from being killed.
Note: Better not enable Auto Optimize and Shake Optimize simultaneously. Auto Optimize will be shut down by default if Shake Optimize is in function.
Questions from users:
1.How to use Easy Task Killer?
Click OPTIMIZE button to free memory. You can also click “Task Manager” and take a look at the running apps list. Uncheck some apps that you do not want to kill (task killer manager and some system apps for instance). App will kill all apps checked. If you do not want to kill any apps, enter “Task Manager” and long press on the running apps listed. And then a menu will pop up, after you select “Ignore”, apps will be moved to ignore list and won’t be killed.
2.How does ETK/task killer/task killer manager/app killer/service killer make phone run smoother?
Our task killer saves battery by killing apps that no longer run but are still in function in the backend and consuming CPU. ETK speeds up your phone by killing those apps.
3.How to save battery with ETK?
a.Enable auto optimize function to kill apps that do not run but still use memory.
b.Uninstall some battery-draining apps. App’s memory consumption has been listed in our app’s task manager, and you could uninstall them according to their memory consumption.
c.Shut down 3G, WiFi connection as well as Data Sync in app quick config panel if you do not need them to be in function.
4.What is ignore list/ignore?
You can put apps that you do not want to kill in ignore list and it will protect them from being killed.
5.Can you explain on Task Manager? When it has a lot of selected apps to kills, what does this do? If I check them, does it turn off these apps completely? Which apps need to be left on?
If you check selected apps, they will be killed and memory will be released. But you may find that some apps restart after being killed; it is because they are restarted by system events automatically.
Apps related to system services should not be checked, for phone might not work if they are killed.
Favorite Free Download Mobile