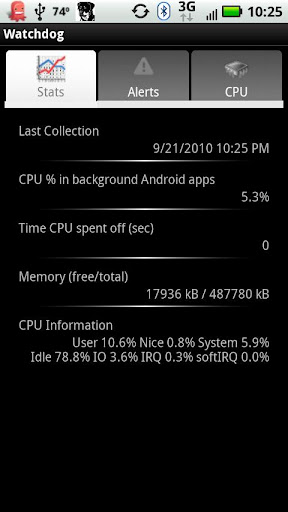 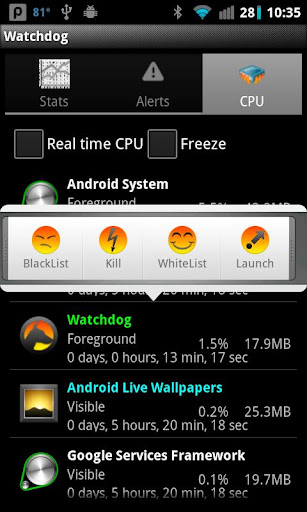 Watch your phone's apps, don't kill them.
Stop killing your apps randomly. Start monitoring them with Watchdog.
You don't need a task killer. But you do need a way to make sure a background app doesn't lose control and eat up all your CPU. Watchdog monitors your apps and alerts when one loses control, allowing you to kill just that single app. Killing apps blindly can cause them to stop working as designed, and most app developers won't even take a bug report from you if you are using a task killer!
From Android 2.2 on, the kill command works only on background apps, and they will likely restart immediately. Watchdog removes the app immediately from the list, since there isn't feedback about whether it was successful. Having lots of apps running doesn't hurt your phone at all unless they are doing something. In fact, killing an app and having it immediately restart simply consumes your phones resources. If you just leave the apps running, they will start immediately when you want to go back to it.
The paid version has all the features of the lite, removing the ads, while adding a “blacklist” feature. This allows you to pick a single app that is constantly misbehaving and assign a CPU % threshold to it. When that app exceeds the threshold, it will be automatically killed.
So stop blindly killing all your apps; be smart by managing them instead. Good for all versions of Android.
Please note that due to the nature of this app, it is hard to decide about a refund within 15 minutes. You can contact us from Google Checkout or via email within 48 hours for a full refund.
Favorite Free Download Mobile